Mini Ottawa | Blog | What Is Llamathrust: A Look At Alternative HP Measurements

What Is Llamathrust: A Look At Alternative HP Measurements

As car owners, we’re all accustomed to the standard unit of measure that goes with every car: HORSEPOWER. However, there are a lot of other units of measurement that they could have used instead. How much fun would it be if they had gone with something like Duckpower instead? Let’s take a look at a few of these fun alternatives together!

assume that the comparison vehicle is a 2020 Mini Countryman All 4, which has 134 horsepower. [Link to vehicle inventory]

Now let’s have some fun.

Donkeypower: The average donkey has about 1/3 the power of a horse. Making the 2020 Countryman around 406 donkey power.

Llamathrust: The llama is actually stronger than a donkey getting about 2/3 horsepower. Meaning that the Countryman has an approximate llamathrust rating of 209.5.

Duckpower: Thanks to some research we know that an average duck has about 0.238 horsepower. Meaning that our example Countryman has a whopping 4,273.5 duck power. That’s a lot of ducks!

Dolphinpower: Did you know that the average dolphin produces 7.25 horsepower? To match the power of the Countryman you would need about 972 dolphins! 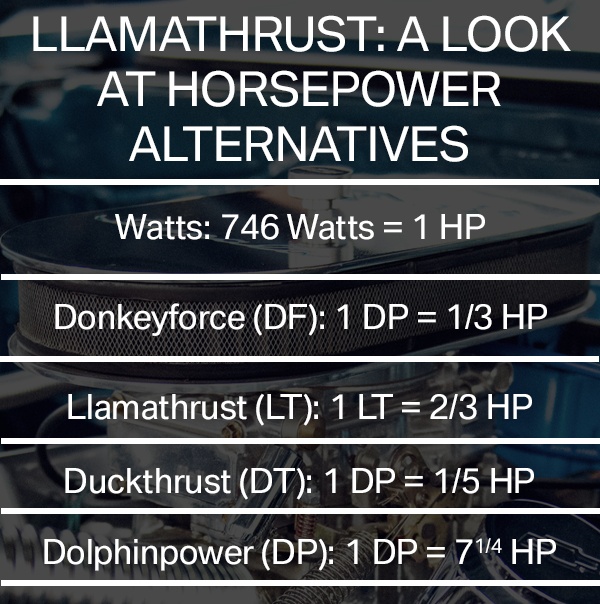 Horsepower has been the performance standard since the inception of the automobile but, maybe it’s time for a change. Do you think we should convert to Watts? Or maybe use lLlamathrust as the new gold standard? Let us know!