The Swedish Archipelago in the MINI Cooper SE Countryman ALL4 Untamed Edition. 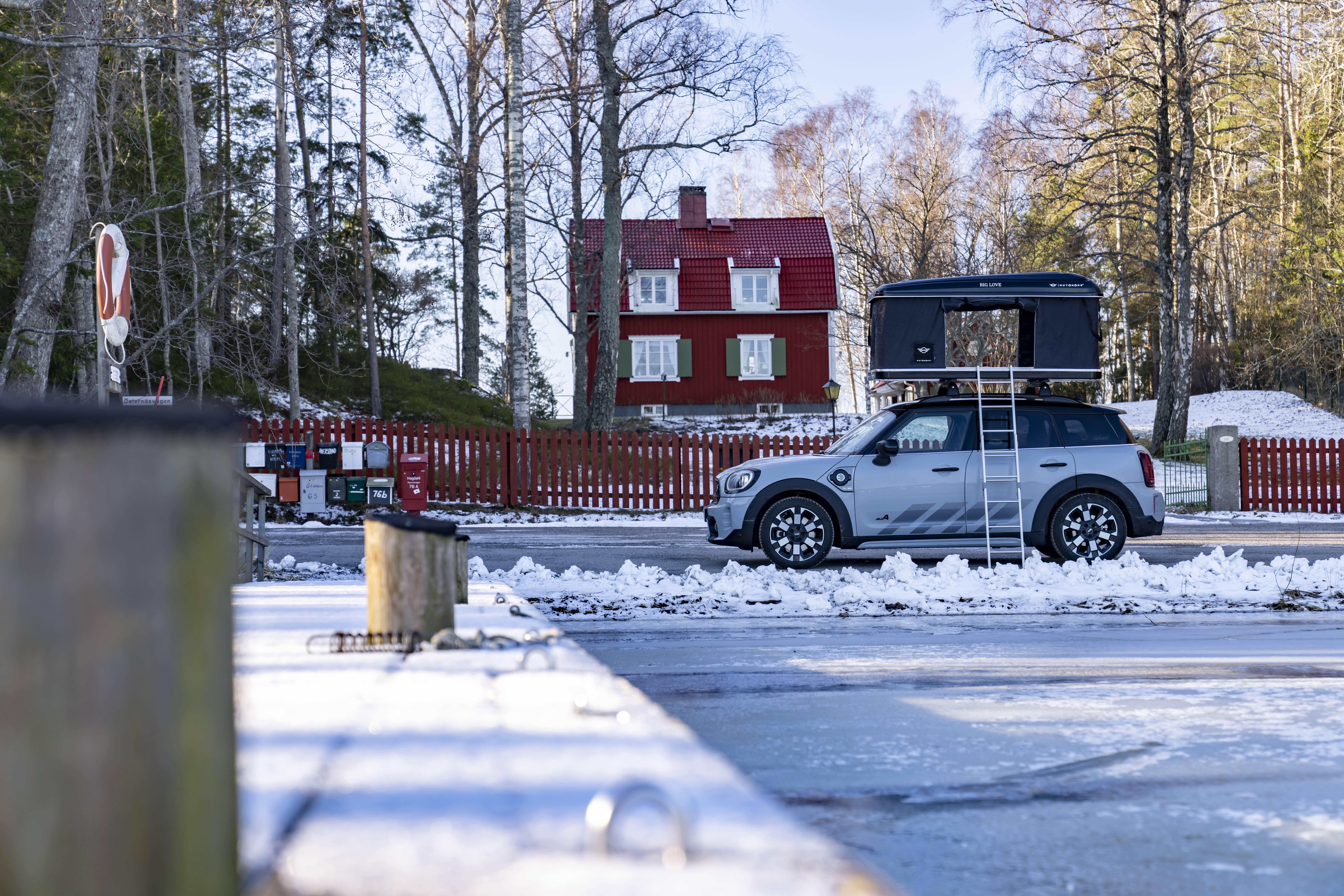 Björknäs. Always follow your nose – that was the fisherman’s advice in the small harbour of Björknäs, when asked about the best route towards Björnö. And it indeed proved to be true, because while the widely spread archipelago area east of Stockholm becomes more and more expansive, the route at Mörtviken approaches the open coastal landscape on the Baltic Sea. And that’s not only something for your eyes to feast on, but also for your nose. The cool winter air in this region is wonderfully fresh, salty and invigorating. So it’s great that the MINI Cooper SE Countryman ALL4 (fuel consumption combined: 2.1 – 1.8 l/100
km according to WLTP, combined power consumption: 16.1 – 15.3 kWh/100 km according to WLTP, CO2 emissions: 47 – 40 g/km according to WLTP) can be driven locally without any emissions in the Untamed Edition, thus keeping the sea air unclouded.

Just a few kilometres after starting off in Björknäs, the 222 motorway heads east through the Ekobergets nature reserve, repeatedly crossing the fjords cutting deep inland on gently curving, airy bridges. At Gustavsberg, the turnoff leads slightly south into the extensive road network towards Ingarö and deeper and deeper into the wintry landscape. With the off-road suitable plug-in hybrid MINI model, going on excursions off paved roads is also a welcome adventure to go in search of the typical Swedish wooden houses in bright red that lie hidden away. The classic Scandinavian colour used for these houses 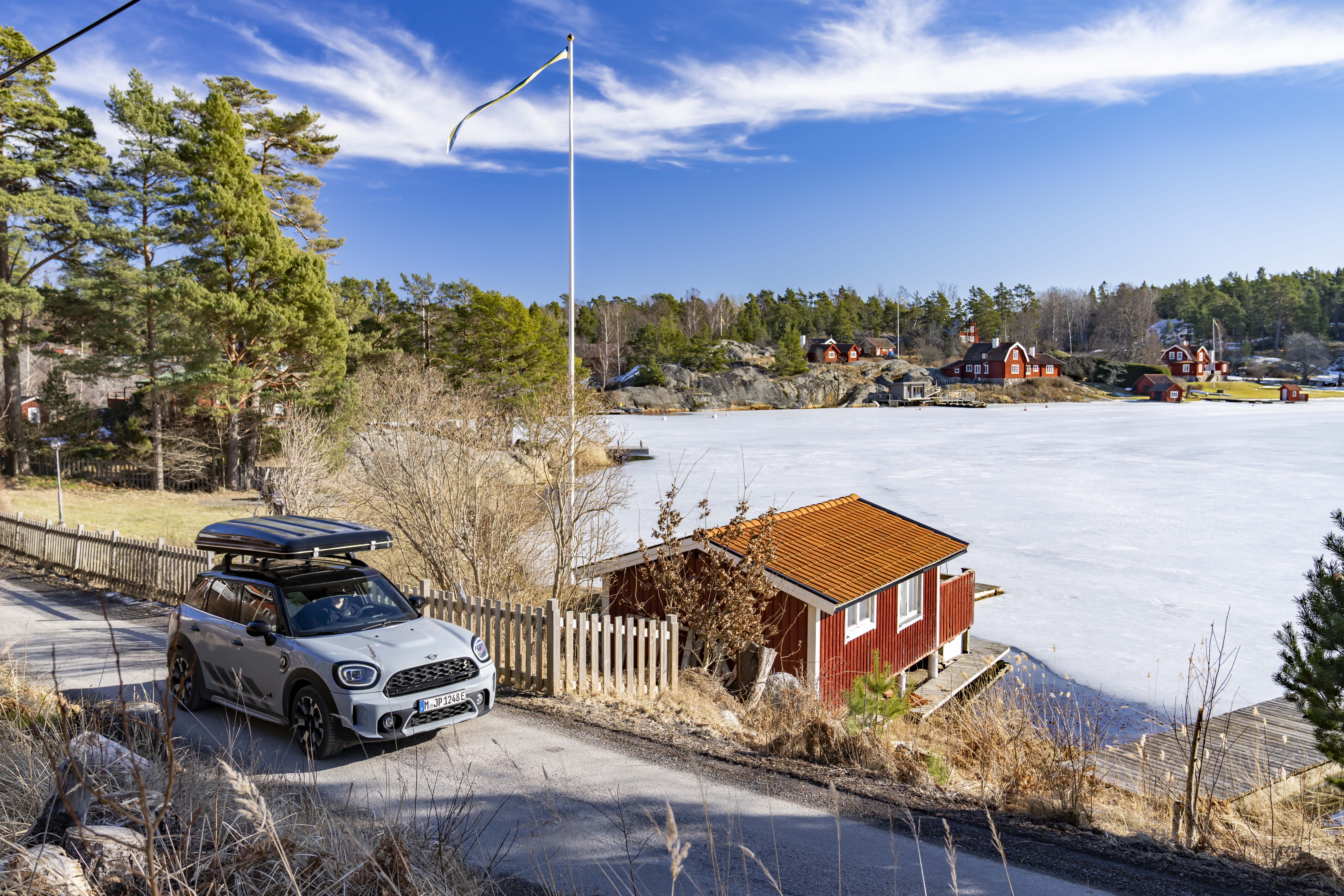 is due to the high copper content in the earth pigments needed to mix the paint.

With the cold temperatures and less and less traffic, road conditions become increasingly wintry. No problem for the perfectly matched drives of the MINI Cooper SE Countryman ALL4. Its 3-cylinder petrol engine with 92 kW/125 hp generated from a cubic capacity of 1.5 litres powers the front wheels, while a 70 kW/95 hp electric motor transmits its power to the rear wheels. With an output of 220 hp overall, the MINI is thus ideally equipped for anything that might come its way. The top speed in purely electric driving mode is 135 km/h.

There are always great views of the brilliant white ice up in the high forest around the picturesque Fiskmyran lake.  Time for a short break and always enough time to open the AUTOHOME roof tent for taking a relaxed look at the nature surrounding us. What was previously almost indistinguishable from a conventional roof box when closed can now be automatically extended upwards in the blink of an eye by opening two safety latches at the front and back and with the help of four gas pressure springs. Inside, you have almost a metre of space to the top. Rain and wind are of no concern to you. The material keeps you dry and well protected. Your picnic tastes all the better on the comfortable mattress with cotton cover.

Travelling to the island landscape of the Swedish archipelago is nothing for the unprepared. This is because the diverse region is too rugged to have a café or restaurant on every corner. After all, that’s what nearby Stockholm is for. Here it’s all about experiencing nature and exploring the wilds off the beaten tourist track. As the MINI Cooper SE Countryman ALL4 Untamed Edition continues its journey towards Björnö, the route passes picturesque Baldersnäs, from where the coastline offers sweeping views towards the southern archipelago. The widely spread-out islands visible from here give you an idea of how many places there are to discover in this region, even from the sea, in the warm season. For example by going on a fishing tour or canoeing – two of the most popular hobbies of Swedish residents. The MINI Cooper SE Countryman ALL4 in the Untamed Edition offers plenty of space for all your equipment with a luggage space with a volume of up to 1,275 litres. 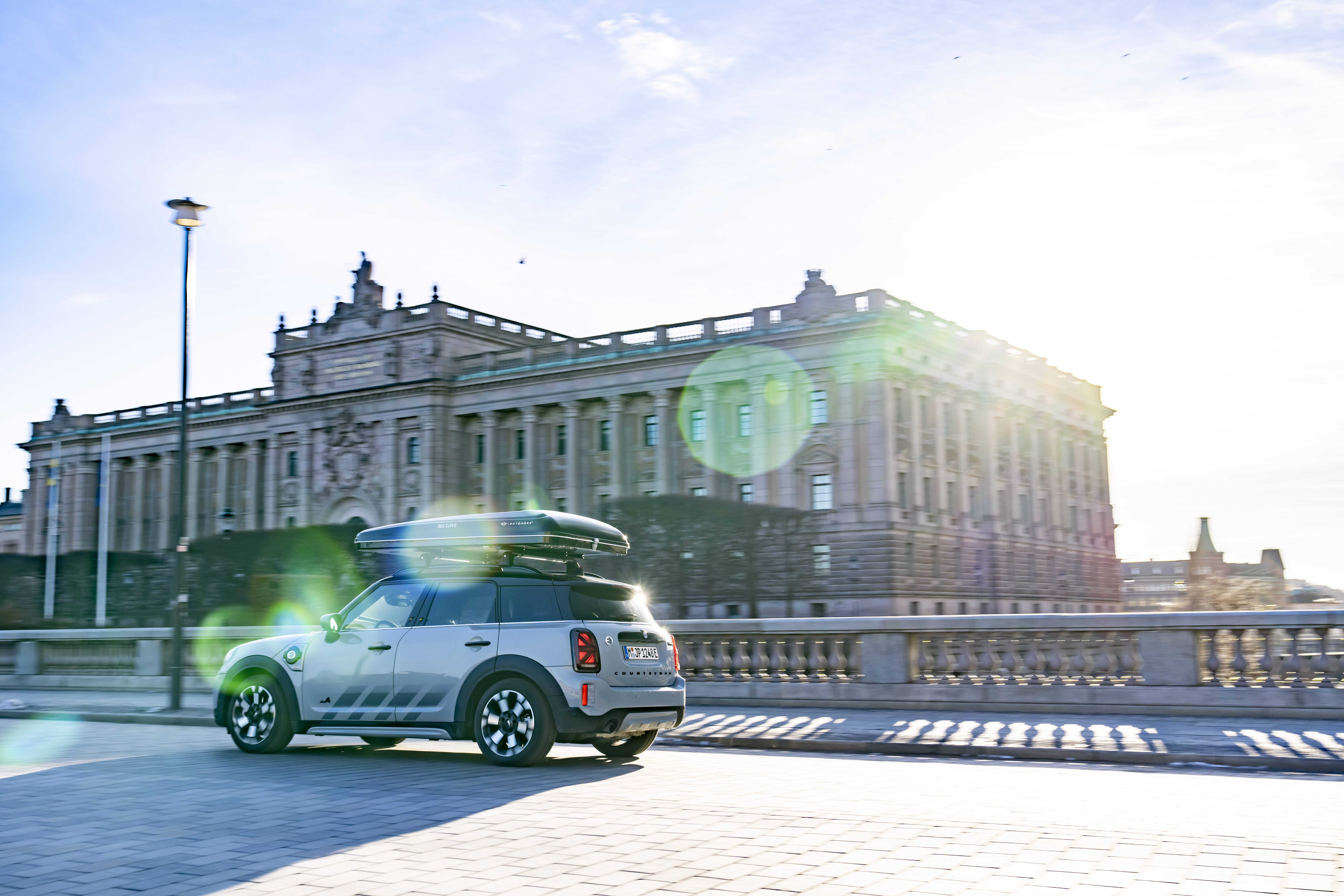 As we enter the Björnö nature reserve, the cloud cover opens up to give us a splendid view of the Baltic Sea. The Swedes really appreciate these brief sunny moments, especially in winter – and exploit them in ways that really take some getting used to. At Björkvik’s Båtklubb on the Baltic Sea, there is still plenty of room for beach towels, but the steps down to the ice-cleared water are well filled with swimmers and the bathing season never quite seems to end in this part of Sweden.
To warm up, we recommend a visit to the Björkvik bistro opposite, with a view of the other offshore islands of the archipelago. Gazing out over the deep blue of the water, we begin to understand why some of the locals refer to their spot of the world as the “Caribbean of Scandinavia”.